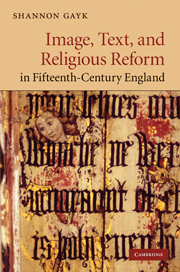 Focusing on the period between the Wycliffite critique of images and Reformation iconoclasm, Shannon Gayk investigates the sometimes complementary and sometimes fraught relationship between vernacular devotional writing and the religious image. She examines how a set of fifteenth-century writers, including Lollard authors, John Lydgate, Thomas Hoccleve, John Capgrave, and Reginald Pecock, translated complex clerical debates about the pedagogical and spiritual efficacy of images and texts into vernacular settings and literary forms. These authors found vernacular discourse to be a powerful medium for explaining and reforming contemporary understandings of visual experience. In its survey of the function of literary images and imagination, the epistemology of vision, the semiotics of idols, and the authority of written texts, this study reveals a fifteenth century that was as much an age of religious and literary exploration, experimentation, and reform as it was an age of regulation.