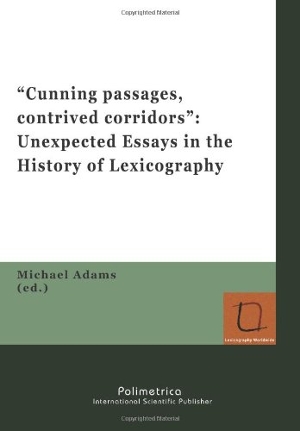 “Cunning passages, contrived corridors”: Unexpected Essays in the History of Lexicography treats a variety of unexpected subjects, less familiar dictionaries such as Bosworth’s Dictionary of the Anglo-Saxon Language, Fennell’s Stanford Dictionary of Anglicised Words and Phrases, the Anglo-Indian dictionary Hobson-Jobson, Butuzov’s 19th-century English-Russian dictionary of English slang, and many others, as well as familiar ones, like Johnson’s Dictionary of the English Language and the Oxford English Dictionary. It also includes a set of essays on the making of the recently published Historical Thesaurus of the Oxford English Dictionary and its character as a work of lexical and cultural system and reference. Lexicography is often misunderstood as impersonal and disembodied: people consult “the” dictionary without thinking much about the people who made the particular dictionary in hand or the circumstances in which it was made, what intellectual assumptions and language attitudes underlay its making, how collaboration, competition, confrontation, and compromise shaped the work, how the vanity of human wishes can guide lexicographers and how whispering ambitions can deceive them. For the benefit of anyone interested in lexicography in any of its myriad aspects, the contributors to this volume make cunning passages and contrive corridors into the past and prove that the history of lexicography is a vital and often surprising field of scholarly inquiry.