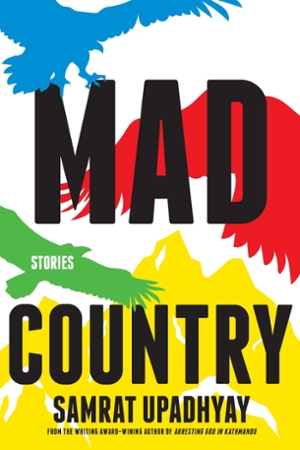 Seven stories and a novella by a Nepali author who explores universal themes of envy, racism, political power, and disappointment in love with subtle and persuasive power.

The opening story introduces us to Shalini, a woman who edits Fast Forward (also the name of the story), a journal investigating political corruption in Nepal. She’s courageous and defiant in the face of denunciations by Minister Gujrel, whose security forces she has accused of murder. This political drama plays out against the personal drama of Shalini and two of her friends, one of whom is suicidal. “Beggar Boy” explores class and privilege as Ramesh, from a well-to-do family, has fantasies about robbing a bank. He also begins to develop a fascination, almost an obsession, with the poor, to the extent that he gets some old clothes and “practices” being poor. By the end of the story he has indulged both fantasies, with unexpected results. Upadhyay’s novella, Dreaming of Ghana, is a mature piece that allows him more freedom to explore the vagaries of character he excels at. Aakash works at a tourist magazine, a job he hates. He begins to have dreams of Ghana, which is odd because beyond “Africa” he doesn’t even know where the country is. Then something bizarre happens that conflates dream with reality—Aakash rescues a dark-skinned girl from a mob. She seems to be mute, and this allows him to make her a blank slate on which he can write a fantasy. He names her “Ghana” and begins to fall in love with her. The final story, “America the Great Equalizer,” is the only one that takes place in the United States, though the focus is on a Nepali graduate student studying political science at Northern Illinois University. When a long-distance relationship with a woman back in Nepal goes sour, he drops out of school, takes a dead-end job, and winds up in a street demonstration in Ferguson, Missouri, acting out his continuing preoccupation with race.