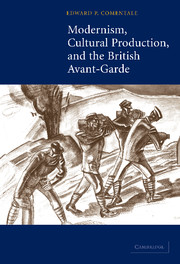 Exposing the links between art, literature and early twentieth-century capitalism, Edward Comentale demonstrates how apparently progressive avant-garde movements, in their celebration of individualism, competition and labor, collaborated with a market defined by a monstrous increase in production and consumption. Comentale's interdisciplinary study examines art and sculpture as well as writing by Virginia Woolf and T.S. Eliot, among others, in the light of psychoanalytic, economic and political theory. This book will be of interest to scholars of literary and cultural modernism.