A Century Of Irish Drama: Widening the Stage 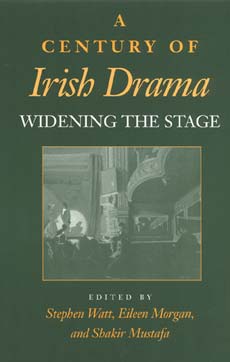 This book traces a significant shift in 20th century Irish theatre from the largely national plays produced in Dublin to a more expansive international art form. Confirmed by the recent success outside of Ireland of the "third wave" of Irish playwrights writing in the 1990s, the new Irish drama has encouraged critics to reconsider both the early national theatre and the dramatic tradition it fostered.

On the occasion of the centenary of the first professional production of the Irish Literary Theatre, the contributors to this volume investigate contemporary Irish drama’s aesthetic features and socio-political commitments and re-read the plays produced earlier in the century. Although these essayists cover a wide range of topics, from the productions and objectives of the Abbey Theatre’s

first rivals to mid-century theatre festivals, to plays about the "Troubles" in the North, they all reassess the oppositions so commonplace in critical discussions of Irish drama: nationalism vs. internationalism, high vs. low culture, urban experience vs. rural or peasant life.

Stephen Watt is Professor of English and Cultural Studies at Indiana University-Bloomington, and author of Postmodern/Drama: Reading the Contemporary Stage, Joyce, O’Casey, and the Irish Popular Theatre, and essays on Irish and Irish-American culture. He has also written extensively on higher education, most recently Academic Keywords: A Devil’s Dictionary for Higher Education (with Cary Nelson).

Eileen M. Morgan is a lecturer in English and Irish Studies at the University of Michigan, Ann Arbor. She is currently working on Sean O’Faolain’s biographies of De Valera and on Edna O’Brien’s 1990s trilogy, and is preparing a book-length study on the influence of radio in Ireland.

Shakir Mustafa is a Visiting Instructor in the English department at Indiana University. His work has appeared in such journals as New Hibernia Review and The Canadian Journal of Irish Studies, and he is now translating Arabic short stories into English.