A History of Old English Meter 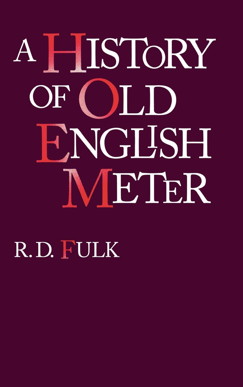 In A History of Old English Meter, R. D. Fulk offers a wide-ranging reference on Anglo-Saxon meter. Fulk examines the evidence for chronological and regional variation in the meter of Old English verse, studying such linguistic variables as the treatment of West Germanic parasite vowels, contracted vowels, and short syllables under secondary and tertiary stress, as well as a variety of supposed dialect features. Fulk's study of such variables points the way to a revised understanding of the role of syllable length in the construction of early Germanic meters and furnishes criteria for distinguishing dialectal from poetic features in the language of the major Old English poetic codices. On this basis, it is possible to draw conclusions about the probable dialect origins of much verse, to delineate the characteristics of at least four discrete periods in the development of Old English meter, and with some probability to assign to them many of the longer poems, such as Genesis A, Beowulf, and the works of Cynewulf.

A History of Old English Meter will be of interest to scholars of Anglo-Saxon, historians of the English language, Germanic philologists, and historical linguists.