Members of His Body: Shakespeare, Paul, and a Theology of Nonmonogamy 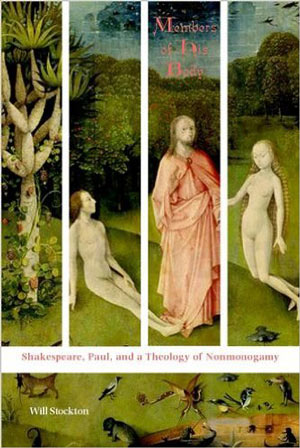 Building on scholarship regarding both biblical and early modern sexualities, Members of His Body protests the Christian defense of marital monogamy. According to the Paul who authors 1 Corinthians, believers would do well to remain single and focus instead on the messiah's return. According to the Paul who authors Ephesians, plural marriage is the telos of Christian community. Turning to Shakespeare, Will Stockton shows how marriage functions in The Comedy of Errors, The Merchant of Venice, Othello, and The Winter's Tale as a contested vehicle of Christian embodiment. Juxtaposing the marital theologies of the different Pauls and their later interpreters, Stockton reveals how these plays explore the racial, religious, and gender criteria for marital membership in the body of Christ. These plays further suggest that marital jealousy and paranoia about adultery result in part from a Christian theology of shared embodiment: the communion of believers in Christ.

In the wake of recent arguments that expanding marriage rights to gay people will open the door to the cultural acceptance and legalization of plural marriage, Members of His Body reminds us that much Christian theology already looks forward to this end.

Will Stockton, Associate Professor, Clemson University, Members of His Body: Shakespeare, Paul, and a Theology of Nonmonogamy (Fordham UP, 2017)