An Empire of Air and Water: Uncolonizable Space in the British Imagination, 1750-1850 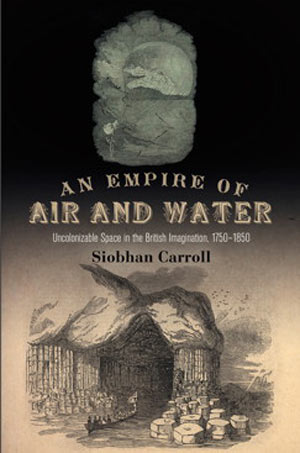 Planetary spaces such as the poles, the oceans, the atmosphere, and subterranean regions captured the British imperial imagination. Intangible, inhospitable, or inaccessible, these blank spaces—what Siobhan Carroll calls "atopias"—existed beyond the boundaries of known and inhabited places. The eighteenth century conceived of these geographic outliers as the natural limits of imperial expansion, but scientific and naval advances in the nineteenth century created new possibilities to know and control them. This development preoccupied British authors, who were accustomed to seeing atopic regions as otherworldly marvels in fantastical tales. Spaces that an empire could not colonize were spaces that literature might claim, as literary representations of atopias came to reflect their authors' attitudes toward the growth of the British Empire as well as the part they saw literature playing in that expansion.

Siobhan Carroll interrogates the role these blank spaces played in the construction of British identity during an era of unsettling global circulations. Examining the poetry of Samuel T. Coleridge and George Gordon Byron and the prose of Sophia Lee, Mary Shelley, and Charles Dickens, as well as newspaper accounts and voyage narratives, she traces the ways Romantic and Victorian writers reconceptualized atopias as threatening or, at times, vulnerable. These textual explorations of the earth's highest reaches and secret depths shed light on persistent facets of the British global and environmental imagination that linger in the twenty-first century.

Siobhan Carroll is Associate Professor of English at the University of Delaware.

Siobhan Carroll, Associate Professor, University of Delaware; An Empire of Air and Water: Uncolonizable Space in the British Imagination, 1750-1850 (University of Pennsylvania Press, 2015)