The Animal Claim: Sensibility and the Creaturely Voice 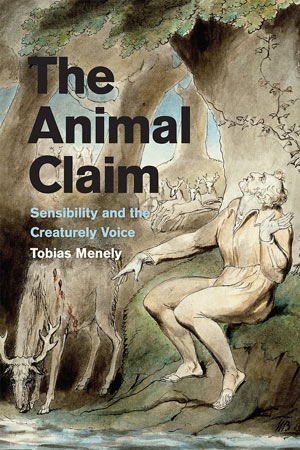 During the eighteenth century, some of the most popular British poetry showed a responsiveness to animals that anticipated the later language of animal rights. Such poems were widely cited in later years by legislators advocating animal welfare laws like Martin’s Act of 1822, which provided protections for livestock. In The Animal Claim, Tobias Menely links this poetics of sensibility with Enlightenment political philosophy, the rise of the humanitarian public, and the fate of sentimentality, as well as longstanding theoretical questions about voice as a medium of communication.

In the Restoration and eighteenth century, philosophers emphasized the role of sympathy in collective life and began regarding the passionate expression humans share with animals, rather than the spoken or written word, as the elemental medium of community. Menely shows how poetry came to represent this creaturely voice and, by virtue of this advocacy, facilitated the development of a viable discourse of animal rights in the emerging public sphere. Placing sensibility in dialogue with classical and early-modern antecedents as well as contemporary animal studies, The Animal Claim uncovers crucial connections between eighteenth-century poetry; theories of communication; and post-absolutist, rights-based politics.